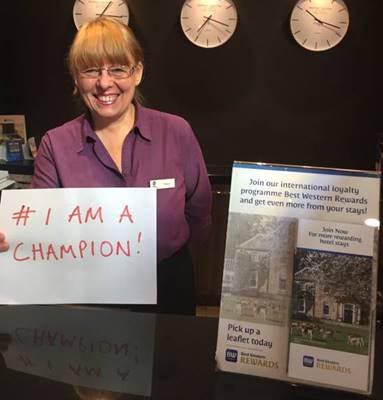 The Standout Insider performance June-August was won by Bogumila Sipel from Cutlers Hotel.  Bogumila has been with the hotel for six years and is currently one of the hotels receptionists.  Her role includes greeting our guests and front of house operations and she was nominated for the award for her outstanding contribution to Best Western Reward member enrollments.  The hotel also won the award for the Most Improved Hotel (March-May versus June-August).  This is testament to all the hard work the entire team at Cutlers have contributed to the running of the hotel in the past six months.

Best Western Cresta Court also won an award for the Hotel with the largest % Front Desk Incentive goal achieved June-August. Commentating on the awards Garin Davies, Chief Executive at Vine Hotels, said: “Cutlers Hotel has achieved so much over the past six months and we are very proud of the whole team there.    An extra special congratulations must go to Bogumila who has excelled in her role of receptionist.  Cresta Court in Altrincham is going from strength to strength with a great team and high level of customer service and satisfaction and we expect it to continue its great work.”